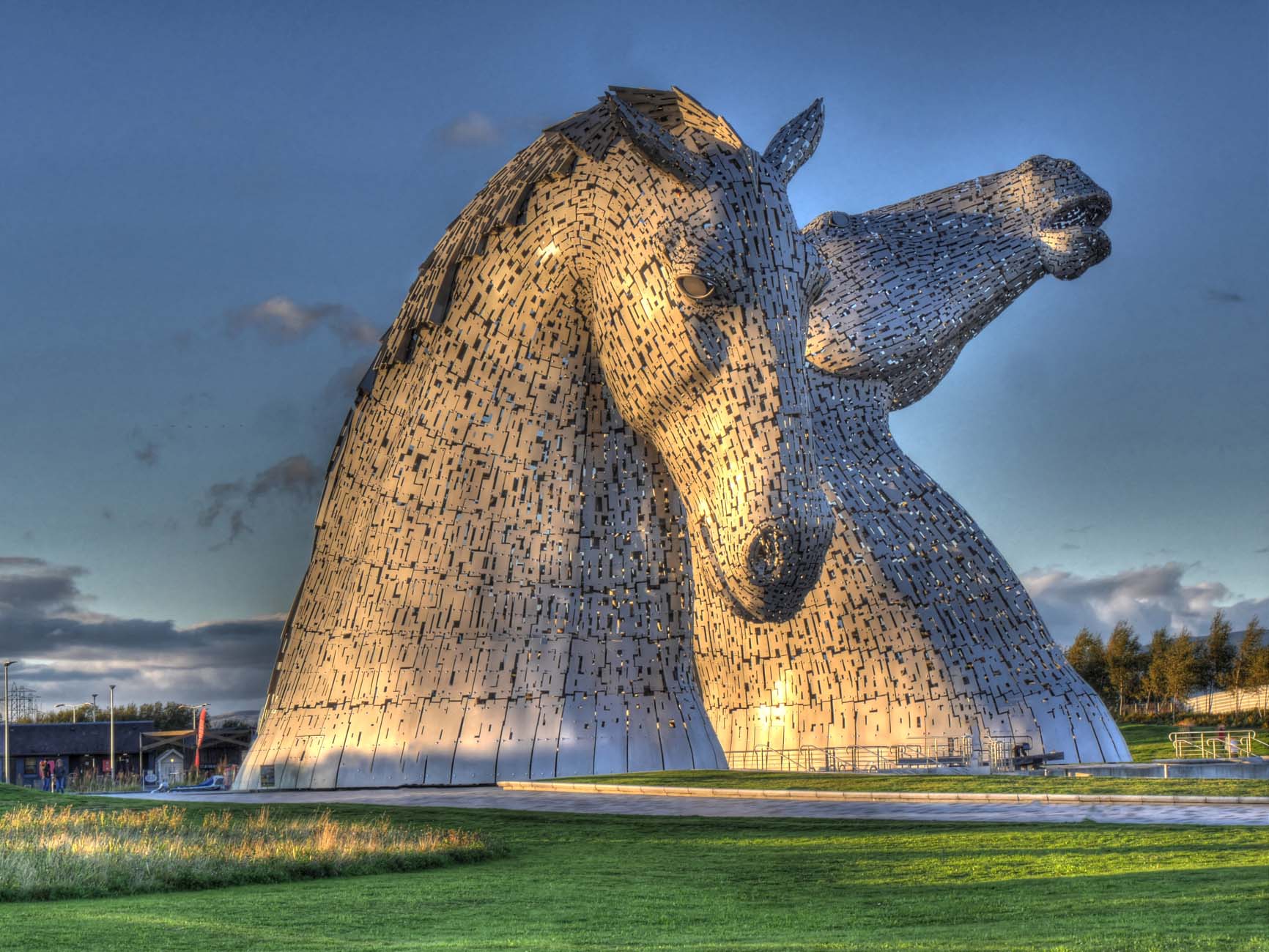 Andy Scott, the creator of the Kelpies, has said that his inspiration came from the great heavy horses which once pulled the laden barges of coal and grain along the Forth and Clyde Canal.

They will certainly stand now as a reminder to our grandchildren of the extent to which we and our forefathers depended on our four legged friends not only on the waterways but in every single aspect of life.

Before motor vehicles appeared towards the end of the 19th century – and for a good many years afterwards – horses pulled ploughs, delivery vans and carts, coaches, hearses and fire engines as well as private traps and gigs.

A century ago there were over 1000 horses at work in Falkirk alone along with dozens of blacksmiths’ shops, livery stables, feed suppliers and the rest to help keep the show on the road. The horse market at Callendar Riggs supplied the locals and horse sales were a regular feature of the famous Falkirk Trysts

Even when steam powered vessels appeared in the early 1800s the owners preferred horses rather than risk damaging the precious waterway.

Around the same time, the first passenger boats introduced a different kind of horse which galloped along often with a ‘‘jockey’’ up top who carried a horn to ‘‘invite’’ slower boats to get out of the way.

They were still using horses to pull heavy laden barges in the 1950s and I can remember clearly seeing the handlers leading them along the towpath from Camelon to Bonnybridge.

Although Falkirk district had been a growing centre of industry for well over a century, agriculture was still of great importance.

In 1900 for example there were 84 farms listed in the area and each of them had a number of horses carrying out the heavy work of ploughing, harrowing, sowing, reaping, binding and carting the produce to market. Even after the arrival of the tractor many local farmers continued to use horses.

The coming of the railways in the 1840s increased rather than diminished the demand for carters as goods were collected from and delivered to Grahamston, the High and other local stations.

And even before steam powered locomotives, Carron Company had operated a horse drawn railway from the works up through the ‘‘back wagon’’ in Bainsford to meet the canal at Burnbank basin.

Little wonder that James Watt devised a new measure, horsepower, to compare what his new improved steam engine could achieve compared to the mighty work horses of his day.

The streets of the town were once chock-a-block with delivery horses and carts.

Aitken’s and Barr’s ‘‘lorries’’ were familiar sights and there was no more popular animal in the 1930s that the mighty Clydesdale called Carnera said to be the biggest working horse in the world.

The Co-operative Societies throughout the district employed hundreds of horses and in Falkirk they were stabled in Thornhill Road.

The first horse to be stabled there was called the ‘‘Provost’’ though whether this was intended as a tribute or an insult is not known!

The Kelpies have become one of the top tourist attractions in Scotland with over  two million visitors .

Buy your souvenir prints of Scotland from Photogold .